An Argument for Trial and Possible Execution of Financial Terrorists 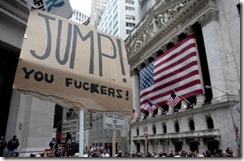 If the evil, greedy, Wall Street and Washington terrorists that wrecked America committed mass suicide, by jumping out corner office windows or imbibing cyanide-laced Kool Aid, Jonestown style, it would not be enough!

Not enough to put a floor under stocks.  Never enough to counter the destruction of the lives and life savings of millions, perhaps a billion, investors.

Thus, the only real solution, to re-instill confidence in America's legal and financial system, is to file charges, hold trials, and if legally warranted, stage death penalty executions for anyone responsible for perpetrating acts of war and terrorism against the United States!

In short, I simply do not understand the common argument that, under current statutes, no crimes were committed leading to the 2008 financial crisis ?!  That no depth of knowing or negligent greed or incompetence can be construed as criminal in this matter?!

And even if I believed that argument was reasonable, I would simply posit the following scenario:  Imagine if the actions of the Al Queda terrorists responsible for 911 had not been technically illegal under U.S. law at that time?  Surely our government , our country and we as a people would have rendered their acts illegal, retroactively, using new or reinterpreted laws.

Thus what I am proposing is merely a legal shift or reinterpretation similar to that of U.S. torture policy under John Yoo.  Because such despicable acts as these -- of greed, theft, torture, perhaps even murder against U.S. citizens constitute Acts of War!  And punishing individuals responsible for ultimately hostile actions leading to the destruction of the U.S. financial system and the loss of American lives is perfectly legal under The War Powers Act.

Today, there are various and sundry bankers, politicians, lobbyists and enablers free in the United States.  But rather than allow them to collect and spend hundreds of millions in severance pay and contract bonuses, our government arguably has a responsibility to hold them legally responsible for the wave of terror and death they perpetrated.

After all, our present financial and human catastrophe is no less damaging to the United States of America than if its perpetrators had exploded a nuclear bomb on Wall Street!

Surely intelligent, elite and educated financial experts knew they were creating a financial house of cards.  Emails and conversations released anecdotally imply this.  As far back as 2003, Warren Buffet labeled the $60 Trillion in derivatives as "weapons of financial mass destruction."  Today, results argue they simply didn't care.  That they took billions in profits and left America and the world to face the consequences of this disaster.

Now lives have been lost.  Families have been ruined.  Retirements have been canceled.  And the future of the U.S. economic system has been destabilized and rendered unknowable, perhaps even unthinkable.  In a time of war, or any time, such acts, engaged in knowingly or negligently, are crimes punishable under the U.S. Constitution.

Thus, why are there no trials or tribunals?  Why is legal and military redress to seemingly seditious acts of war and terrorism not being pursued?